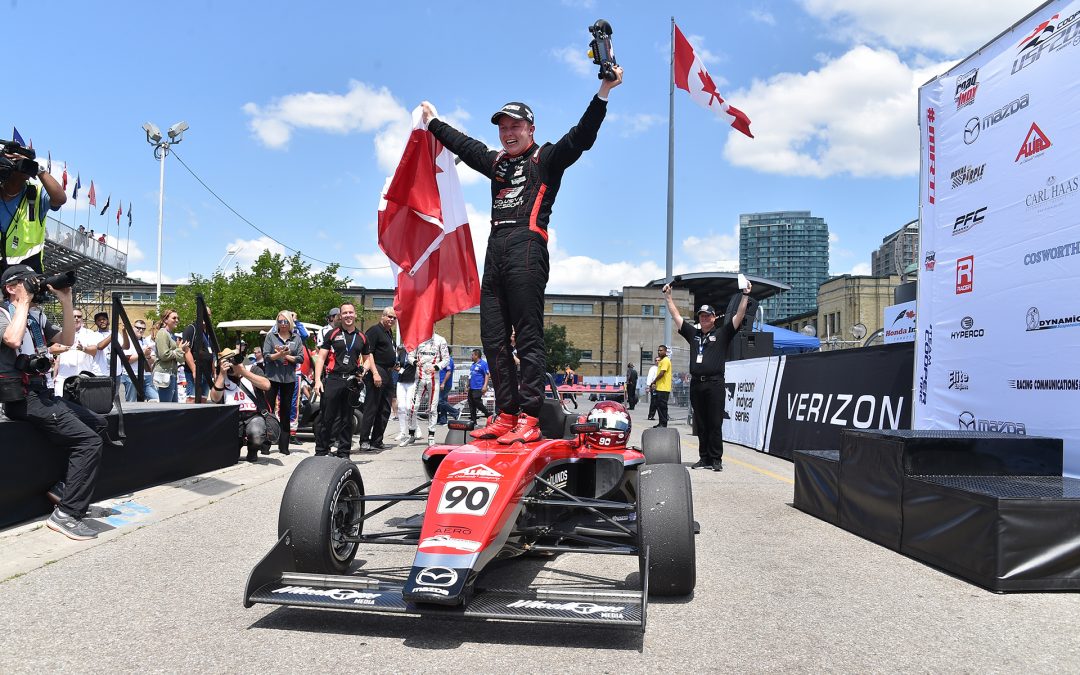 TORONTO, ONTARIO (July 16, 2017) – Saskatoon, SK’s Exclusive Autosport is competing in its first season in the ultra-tough Cooper Tires USF2000 Championship Powered by Mazda and they could not have asked for a better location for their breakout event.  After working diligently through the opening half of the season to develop their set-ups and come up to speed on the first rung of the Mazda Road to Indy Presented by Cooper Tires, the team was victorious on home soil, triumphantly winning both ends of the doubleheader with their star Canadian driver Parker Thompson at the Toronto Indy event.  Red Deer, Alberta’s Thompson dominated the opening race of the weekend on the 1.749-mile, 11-turn temporary street course set around Exhibition Place, qualifying on the pole and then managing his gap to earn a 0.873-second win.  On Sunday, Parker and the team controlled their early pace in Race 2, identifying a feisty battle for the lead that was displaying signs of potential chaos. Thompson hung back in fourth, biding his time, and then took advantage of the anticipated contact between the leaders to slip through to the point and his second win of the weekend.

“Toronto was a massive weekend for the team, and I’m proud of them after they came together following our struggles on the oval at Iowa Speedway last weekend,” admitted Exclusive Autosport owner Michael Duncalfe. “We re-focused and got behind our drivers, and Parker showed his experience and poise to lead our drivers and crew forward.  His performance on Saturday was tremendous, and it injected such confidence in the team. Sunday was a perfect race, as we were on the radio making sure that Parker knew how crazy it was getting up front. He was patient and stayed out of trouble, and took the win.  We couldn’t have asked for anything more from Jayson and Dev. It was their first time on the track in Toronto in USF2000, they continued to get quicker, and they finished both races in the top-12.”

Thompson was quick out of the gate, topping the practice time sheet on Friday morning before earning his second pole position of the year with a great run in afternoon qualifying for Race 1.

Thompson turned in a flawless performance in the opening race, held on Saturday afternoon, which went green to checker without issue.  Parker managed the gap back to point leader Oliver Askew, laying down a quicker lap when needed to extend the advantage.  The win was emotional for Parker and the team, giving them their first series victory in the best place possible.

After qualifying fourth in a dynamic qualifying session for Race 2, Thompson settled into line at the start of the second event, running behind what quickly developed into a heated battle for the lead between Alex Baron and David Malukas. Thompson displayed patience in backing off a little, having sized up the situation ahead of him.  As expected, the leader collected each other on the exit of turn three and pulled point leader Oliver Askew into the carnage, while Thompson slipped through to assume the lead.  Parker managed the restart perfectly and went on to a 0.637-second win.

The sweep of the main events has thrust Thompson back into the championship chase, as he currently sits third, 75 points out of the lead.  Momentum is on the team side, and they are all focused on continuing this level of performance in the final two weekends of the year. The next event on the Cooper Tires USF2000 Championship Powered by Mazda is just over a week away, on July 27-30 at the Mid-Ohio Sports Car Course in Mansfield, Ohio.

Driver Quote: “Nothing has ever felt better in my career than getting to hold the red and white maple leaf high in victory lane at my country’s only IndyCar race. The fact that I got to do it twice in one weekend makes this something I will never forget for the rest of my life. Getting these two wins for Exclusive Autosport is also a huge weight off my shoulders. It feels amazing to get Michael Duncalfe and his team some dominant victories, because they deserve them. None of this would be possible without the dedicated crew that forms Exclusive Autosport! I told the boys in black in red, if we stuck to perfecting the process, wins would come our way! This team has been 100% behind me all year, which makes this weekend even more special. Lastly, a huge thanks to my family, supporters, fans and sponsors. They have been with me through thick and thin this year, so I’m ecstatic I could prove them right on such a big weekend for us all. I owe so much to TriQuest NDT, Openhwy and Badlands Motorsports Resort.”