THOMPSON SALVAGES POINTS WITH VALIANT DRIVE IN USF2000 AT INDY 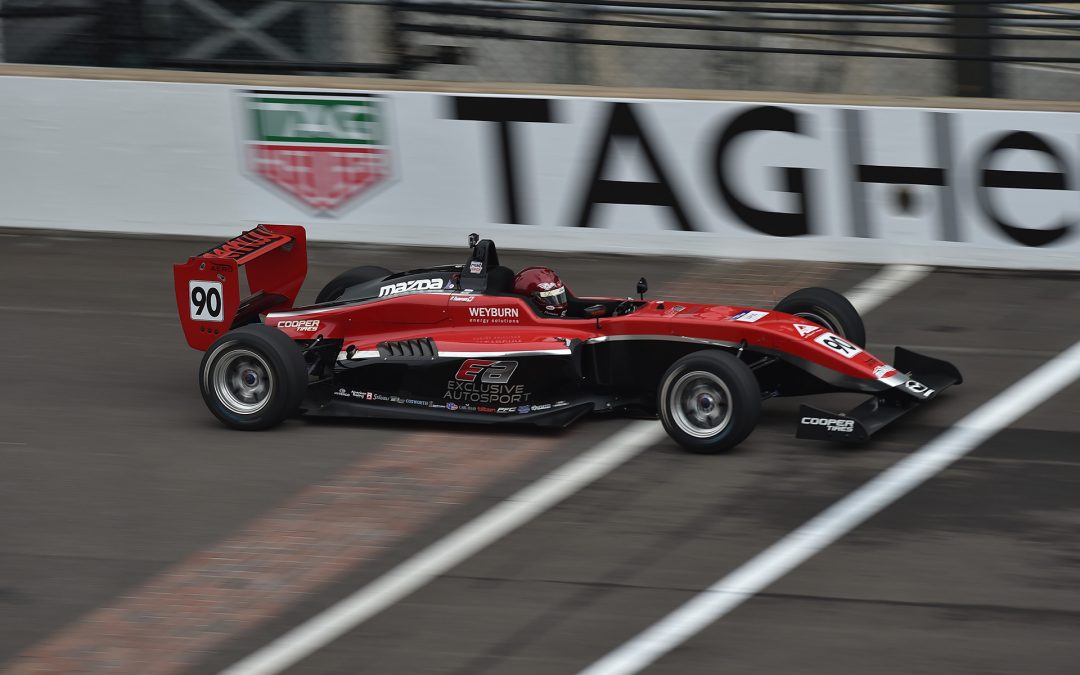 INDIANAPOLIS, IN (May 13, 2017) – Exclusive Autosport marked a major milestone in its history on the May 11-13 weekend as the team participated in its first official competition event at the Indianapolis Motor Speedway. The growing motorsports operation was competing in the Cooper Tires USF2000 Championship Powered by Mazda, running the 2.349-mile, 14-turn road course that lies within the walls of IMS. The results that unfolded during the three-day event were not exactly what the team expects from any track outing. Despite dealing with the struggles of learning both the new USF-17 race car and the new track, the team was still able to cap the weekend in Indy with a pair of top-six finishes for both Parker Thompson and Luke Gabin in the second race of the weekend. Gabin advanced in both races despite tough qualifying performances, posting a pair of impressive top-10 finishes. USF2000 debut with Exclusive, carding a pair of top-16 finishes.

“As I look back at the weekend, it was a tough one for us to take, as we know that we’re better than this, but there were situations and on track penalties that were simply outside of our control, which is obviously very disappointing,” commented team owner Michael Duncalfe. “But I’m proud of my crew and my staff for staying focused on the target so that we could leave the weekend with a couple of solid results. I know that we’re all looking forward to getting to Road America to get right back at it. We have a pair of drivers in the top-seven in the points and our focus moving forward is to advance up the grid and the championship standings.”

In the opening race, Thompson was caught out when the initial start was waved off and the driver ahead of him locked up the brakes unexpectedly. The Canadian was forced to pit for a new front wing assembly and lost a lap, and was officially scored in 19th. Gabin started 18th and used his considerable experience to navigate through the mid-pack chaos, working his way forward to a strong 10th place finish, which was a highlight of the day.

The whole team was focused on a recovery during Saturday morning’s Race 2, and both Thompson and Gabin attacked quickly to gain spots early. Gore was involved in an opening lap wreck that sent three cars to the garage, ending his weekend. Thompson clawed his way to fourth by the checker and the solid result has put him fourth in points. Gabin completed his impressive weekend with a run up to sixth in Race 2, a 10-position advancement after starting 16th. Luke’s solid top-10 pairing of results have moved him to seventh in the championship standings.

The next event on the Cooper Tires USF2000 Championship Powered by Mazda will be an extremely popular stop on the circuit, as the team will travel to Wisconsin at the famed Road America facility. Rounds Seven and Eight will be held as part of the Verizon IndyCar Series Kohler Grand Pix on the 4.0-mile, 14-turn road course in Elkhart Lake, WI on June 23-25.
ROUNDS #5-6 – MAY 11-13, 2017
INDIANAPOLIS MOTOR SPEEDWAY – INDIANAPOLIS, IN

Driver Quote: “Well, there’s no denying that it was a character building weekend for the #90 Exclusive Autosport team. After such an awesome start to the weekend in practice, unfortunately, we dropped the ball for our qualifying sessions. We had a top-three car, but in some cases strategy can be more important than outright speed. This led to the starting positions of 11th and 10th in the two races. After getting involved in an incident out of my control on the first lap of Race 1, it led to a no-points finish for my championship. I am proud to say that our team had a huge comeback though for Race 2. After starting in 10th, we pulled off a very well executed race, finishing fourth. It felt good to salvage what we could out of a tough weekend. Winning a championship isn’t determined by how you perform on your best weekends, it’s how you perform on the weekends when everything doesn’t go your way. We will back stronger than ever in the next round at Road America.”