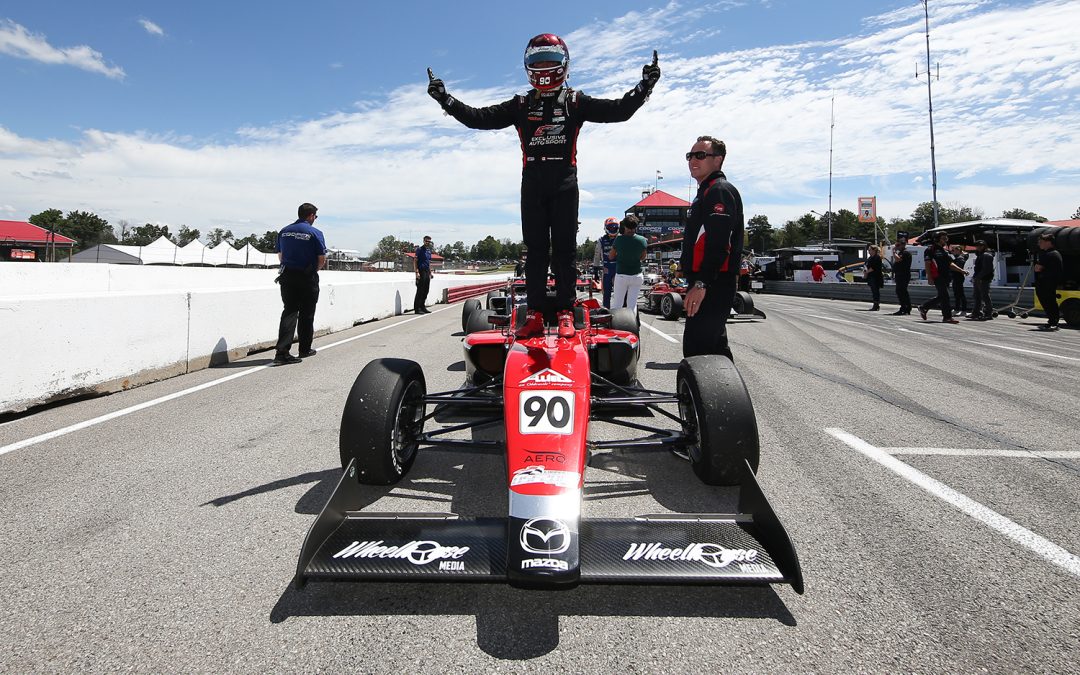 LEXINGTON, OHIO (July 29, 2017) – Exclusive Autosport is riding the wave of momentum from their successful weekend in Toronto just two weeks ago, where they won their first races in the Cooper Tires USF2000 Championship Powered by Mazda. Canadian Parker Thompson showed his tremendous skills in the sweep of the event, and he was ready to take on the next challenge when he arrived at the Mid-Ohio Sports Car Course last Thursday. Thompson paced the opening practice session and would eventually post a pair of podium finishes, as a strong second in Race 1 on Friday was followed by a dominant race win on Saturday. The results have cemented his third-place position in the championship standings. The team’s trio of drivers all advanced from their starting position in both races, with the successful exception of Thompson’s Race 2 win from the pole. It was Exclusive Autosports’ finest overall outing of the season.

“It was another strong weekend for my Exclusive Autosport team. I can’t say enough about my amazing crew, our drivers, their parents and our sponsors,” offered Michael Duncalfe, team owner, commending his entire operation. “This is truly a team effort and everyone has been continuing to up their game and it’s showing. Parker once again showed what an incredible talent he is and also how quick the Exclusive Autosport USF2000 cars are. Qualifying nearly seven-tenths ahead of the field and coming away with another win and a second – which makes it three wins and four podiums in the last 4 races – is awesome.”

Thompson led the USF2000 time sheets in the one and only official practice of the weekend, using his track experience to fully leverage the car set-up provided by the Exclusive Autosport engineering staff. Qualifying for Race 1 on Friday morning was a mess, halted on several occasions for drivers going off-course. The track was damp and extremely slick. Thompson ended the run in fourth overall, but a penalty on Rinus VeeKay moved him to the inside of row two for the start of the opening race of the doubleheader.

The opening lap of Race 1 was hard-fought, as Thompson took control of third ahead of an aggressive VeeKay. Parker then went to work on Lucas Kohl for second, taking the position quickly after reaching his gearbox on lap three.  Over the remainder of the run, he continued to push Askew through to a late-race caution, and then just wasn’t able to muster up enough front grip to get past the leader on the restart. Despite battling with aero push in his advances for the lead, Parker brought home an impressive second place finish.

The second race of the weekend was all Parker Thompson. The team had saved a set of sticker Cooper tires for the race, and after qualifying on pole, the Red Deer, Alberta phenom managed the race lead through a lap 16 restart to score a 1.171-second lead.  Parker took all 33 of the available points by sweeping the action, qualifying on pole, leading all the laps, and turning the fast lap in the process.

The season finale for the Cooper Tires USF2000 Championship Powered by Mazda is now a month away, set for Labor Day weekend (September 1-3) at Watkins Glen International in New York. Thompson has secured the third position in the point standings, so he and the team will be aiming to make yet another statement by capping the season with a win, which would be their fourth victory in the last five races.

Driver Quote: “”There’s no better feeling in motorsports than coming to the checkered flag with your whole team on the pit wall celebrating with you! It’s a term not used much in racing, but for Race 2, I had the ‘perfect racecar’. It felt great to showcase to the field what Exclusive Autosport and I are capable of. We were pole by seven tenths of a second, and delivered a dominant race victory. All the blood, sweat and tears every member of this team has given was demonstrated by this weekend’s performance. I couldn’t be prouder of the #90 Openhwy team in Ohio.”