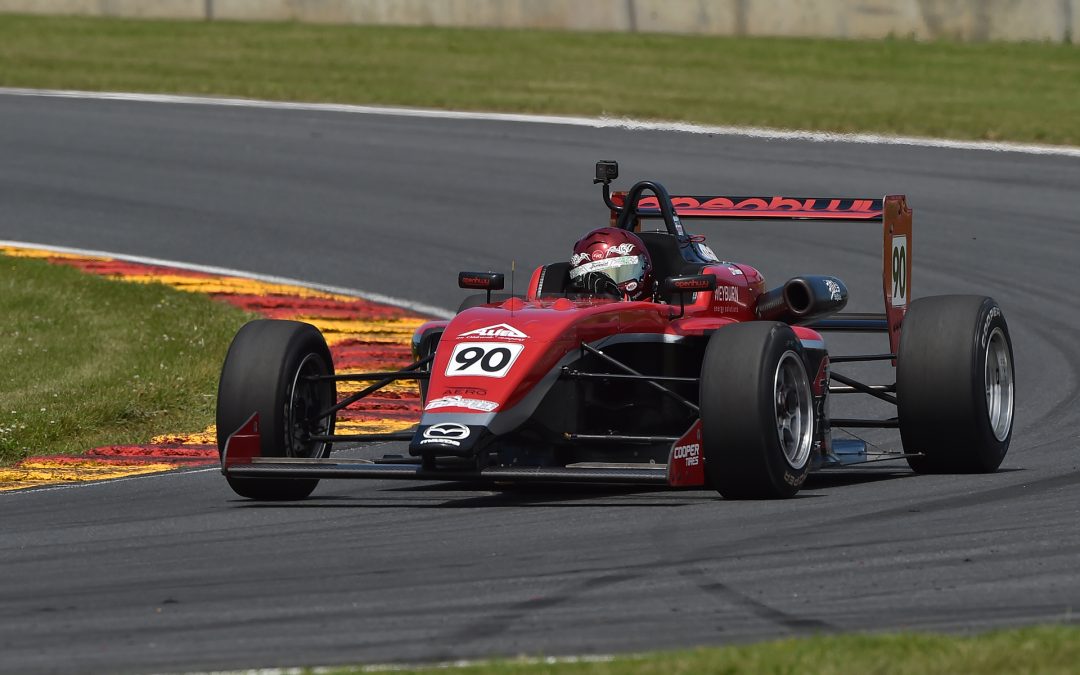 ELKHART LAKE, WI (June 24, 2017) – Leading open wheel junior formula team Exclusive Autosport made its Road America debut this past weekend in the Cooper Tires USF2000 Championship Powered by Mazda. Prior to the Mazda Road to Indy Presented by Cooper Tires event, the team had tasted F1600 victory with a pair of F1600 race wins in the F1 Canadian Grand Prix support event in Montreal with Parker Thompson at the wheel. The Canadian followed up with Ontario F1600 wins at Canadian Tire Motorsport Park just a week later.  Armed with this momentum, the crew and drivers tackled the four-mile Road America layout and came away with strong results as Thompson posted a pair of top-five finishes to remain in the championship hunt.

The drivers hit the track on Thursday afternoon for a single practice session that would set the table for Race 1 qualifying on Friday morning, but a red flag during the event’s only practice severely hampered the track time that the team needed, it being their first trip to Road America. Overnight rain presented the USF2000 drivers with wet but drying conditions, which put on the pressure late in the short 20-minute session. Thompson spent time on the top of the charts during the run and was looking good, but a minor miscue sent him off track in the late going. Thompson wisely elected to bring the car to pit lane for an inspection, which eliminated a chance to leverage the increased grip at the end of the session as the track was drying.  This dropped him from first to seventh, setting up a challenge for Race 1.

In the first race of the doubleheader, Thompson attacked quickly during the opening lap chaos and moved to fifth to begin the battle. The team elected to keep Parker on his qualifying tires in order to save fresh Coopers for both Race 2 qualifying and the race itself. This put the onus on Thompson to battle hard, as he was surrounded by drivers with fresh rubber. He would eventually cross the stripe in fifth after a hard-fought battle for the top-five.

Qualifying for Race 2 took place on Friday afternoon and Parker was on pole for most of the session, leveraging his fresh tires, but in another late session flurry, he slipped to fourth in the order to put himself on the outside of row two for the start of the backend of the weekend doubleheader.

Thompson got a good start to the race and held station in fourth through to an early full course yellow, but on the ensuing restart, he missed the jump and paid the price, losing several positions all the way to turn five. After falling to 10th, Parker delivered a remarkable effort to battle his way back to fifth to complete a double-top-five weekend to earn valuable points in the championship.

Driver Quote: “”Overall, I think the Openhwy #90 Exclusive Autosport team did a great job catching up to the rest of the USF2000 grid that had test time at Road America before the event. The huge circuit is not easy to dial a car in at, so I’m very proud that we had as competitive a car as we did. Realistically, to be competing for pole positions for both races with only one 30-minute session on the track is pretty awesome. Apart from that, we had solid points hauls in both races. We may not have had the pace and results we wanted, but I know the entire Exclusive Autosport organization is hungrier than ever to change that in the latter half of the season.”