Intent on making a mark on the 2022 Carrera Cup North America presented by Cayman Islands, Parker Thompson and JDX Racing arrived at Watkin’s Glen International this weekend just twenty-two points back from the championship lead. After back-to-back wins in the last two rounds, Thompson and JDX Racing expected to challenge for wins in two races scheduled on the iconic New York road course. Instead, the duo struggled to find a rhythm and were further hampered by race incidents that countered team strategies. On the weekend, Thompson and the No. 9 JDX Racing / Shell Tap-Up / Surgere / Byers Porsche / Renier Construction / Jersey Mike’s Subs Porsche earned third and fourth-place finishes. The result allows Thompson to maintain second place in the overall points standings as the 2022 season reaches its halfway mark.

The white, red, and yellow No. 9 machine showed a robust pace in two test sessions on Thursday morning, clocking the third-best time in both sessions. When qualifying launched on Friday morning however, Thompson could not improve his placement in the field. He earned third and fourth place starting spots for Race 1 and 2, respectively.

While Thompson and JDX Racing have yet to earn a pole position in the series, they have repeatedly shown an ability to advance their position during racing action. When Race 1 began on Friday afternoon, they looked to do precisely that. Equipping the No. 9 with their final available set of Michelin slicks, Thompson was poised to utilize the performance bonus of new tires to gain places early in the race. Unfortunately, a major opening-lap incident elsewhere in the field led to a lengthy clean-up and full-course caution. When green flag action resumed more than 20 minutes later, Thompson’s tire advantage had been wasted. He was unable to mount a meaningful attack on the race leaders, driving the No. 9 to the checkered flag in third place.

In Race 2 on Saturday morning, Thompson started in fourth and put up a good fight for the final podium position. His best opportunity came on lap eight following a race restart when he got a great run out of turn four, passing MDK Motorsports driver Trenton Estep under braking as the pair entered the Bus Stop. Unfortunately, Thompson would give the position up shortly after and carry fourth through to the end of the race.

Race 2’s result marks only the second time in eight races this season where Thompson has failed to finish on the podium. In both cases, he missed the podium by just one position. Consistency has allowed the young Canadian to stay within striking distance of the overall championship lead despite winning fewer races than the overall leader. With eight races now complete and eight yet remaining in the season schedule, Thompson and JDX Racing prepare to make a run for the top spot. Next up, the series heads north of the border to Thompson’s home country and the Honda Indy Toronto, July 15-17, 2022.

Parker Thompson
“Rounds 7 & 8 of the Porsche Carrera Cup North America Championship at Watkins Glen were not what the No.9 JDX Racing crew had hoped for, with a lack of pace bringing us a P3 and P4 finish. In simple terms, we got our butts kicked. But this only adds fuel to the fire for this Championship, and the war is only halfway through. We’re sitting in a comfortable 2nd place, ready to put the pressure on as the series heads to my homeland in mid-July!” 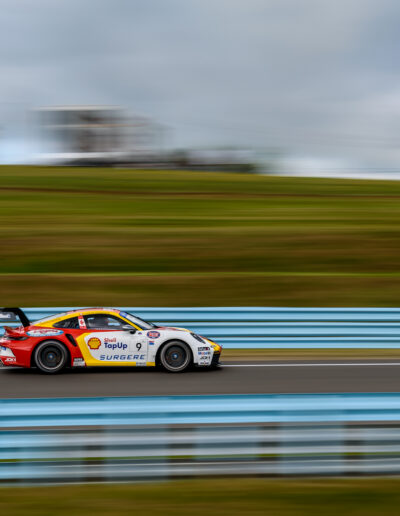 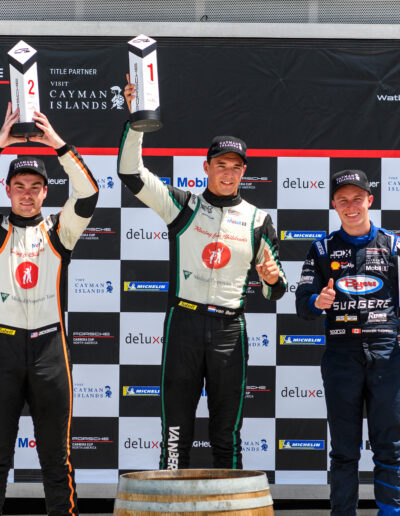 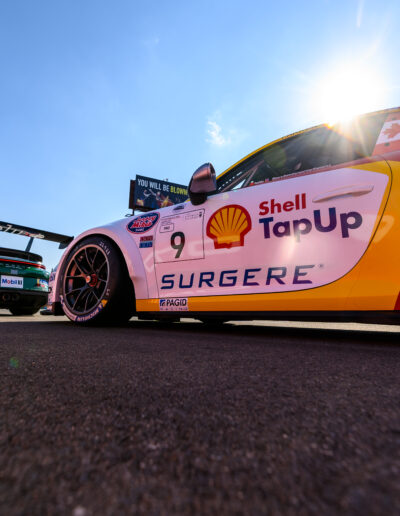 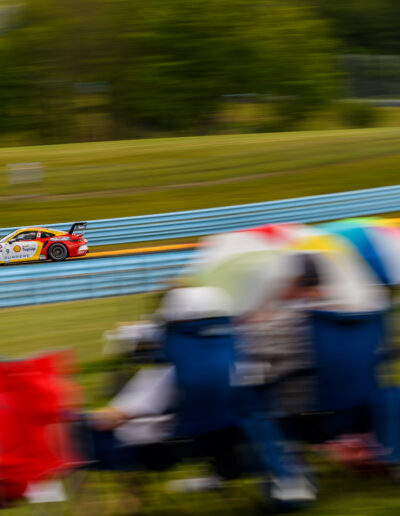 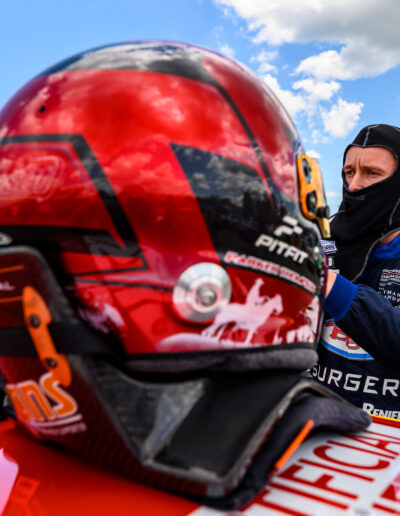 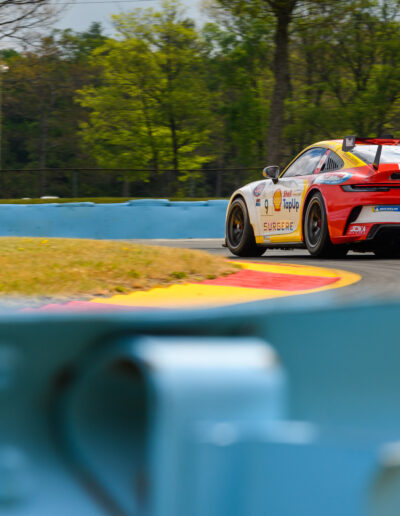 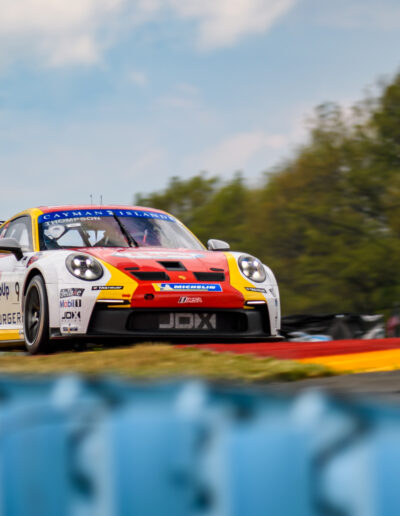 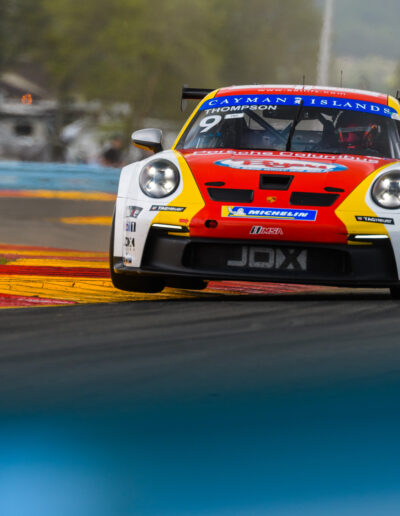 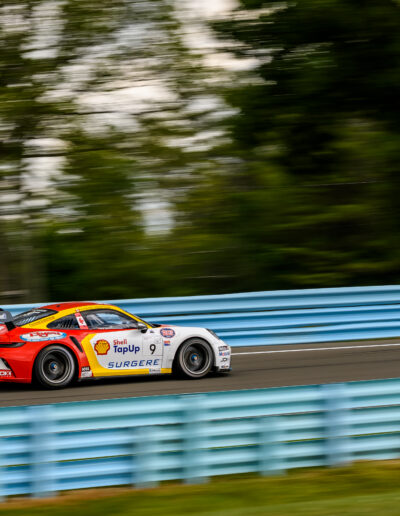 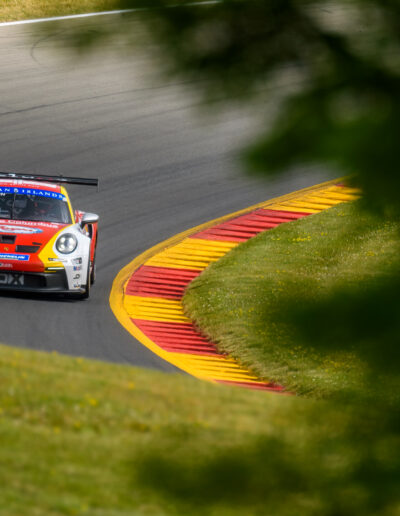 Thompson and team JDX Racing visited Watkins Glen International this past weekend for Rounds 5 & 6 of Carrera Cup North America. Entering the event following a win at Circuit Of The Americas last month, Thompson had the highest expectations for the weekend. Unfortunately, a track boundary violation in Qualifying put Thompson on his back foot early in the weekend, and the team was challenged to adjust for a newly designed Michelin slick tire released at the event. Nevertheless, seventh-place and sixth-place race finishes on the weekend critically allow Thompson to maintain his third-place position in the overall championship standings as the season nears its halfway point.

An updated Michelin slick tire that debuted on the rear of all Carrera Cup cars played a critical role throughout the event. The new tire delivered improved performance, but it also showed different characteristics on track for some teams. In the case of Thompson and JDX Racing, data earned during test sessions earlier in the year was at odds with the behavior seen from the new tire throughout the weekend. Setup adjustments were required throughout the weekend as the team looked to reconcile the new parts with their existing setup.

Demonstrating the adaptability he has earned a reputation for, Thompson showed excellent pace in early practice sessions and clocked top-five times through Qualifying. Review of the session however, revealed that the #9 JDX Racing Carrera Cup had exceeded track limits at a critical moment. The resulting penalty reduced Thompson’s top qualifying time by more than four-tenths of a second, slotting him into starting positions of P7 for Race 1 and P4 for Race 2.

The team strategically chose to capitalize on their stronger starting position in Race 2, reserving a fresh set of tires exclusively for the Saturday race. During racing action though, Thompson and the #9 car struggled with overall pace and could not sustain forward momentum. In Race 2, the advantage of his improved start position was eradicated when he was out-positioned in dense traffic on the opening lap. The final results showed seventh and sixth-place finishes, totaling nineteen points toward the series championship.

With eight of fourteen races on the season calendar remaining, pressure rises as the field behind Thompson closes in on his 3rd place overall standing. Ahead of Thompson, the gap widens. Thus far, he is one of only two drivers who have managed to take a win away from championship points leader, Kay Van Berlo. Thompson will look to do that once more when action resumes on August 6th at Road America.

Parker Thompson
“This Carrera Cup North America series is one of the most competitive series I’ve seen, and there is simply no margin for error. Unfortunately, this weekend we weren’t at our best, and our competitors punished us for it. We’ll take what we can from that and be ready to capitalize for the eight races that remain. With JDX Racing, Porsche Canada, Byers Porsche, Renier Construction, Surgere, and SSi Artificial Lift, we’ve got a committed and capable team behind us, and I’m excited to see what we can accomplish.” 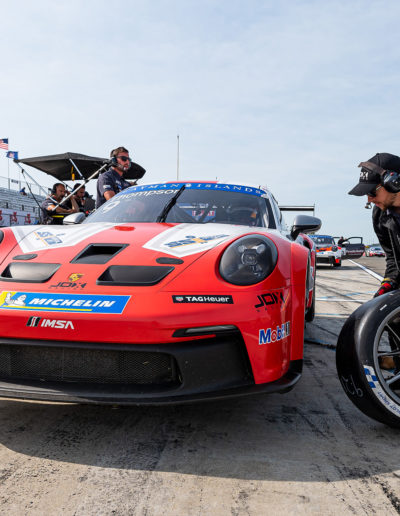 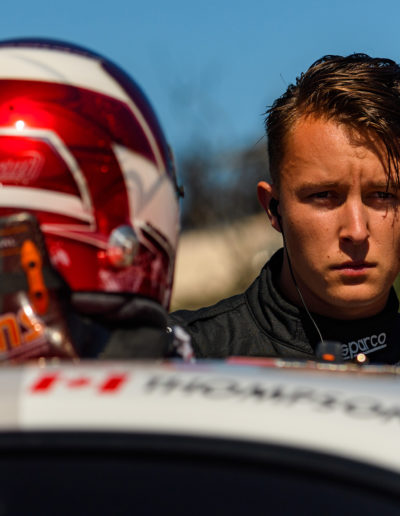 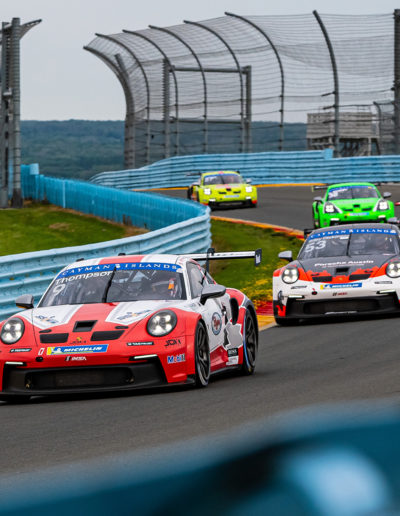 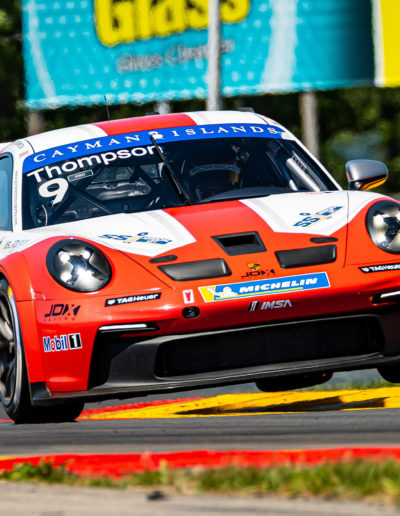