Through all sessions at Sebring Circuit, Thompson was a top performer. Wet conditions in Wednesday mornings practice sessions presented challenges to all entrants as they looked to refine car setups for qualifying. While Thompson managed excellent times through practice, he was not among the leading drivers when qualifying began on a dry Sebring track. With the session winding down, the team called Thompson into the pits for an aggressive setup change in a last-ditch effort to find more speed. The measures worked. While navigating traffic in the session’s final minutes, Thompson clinched third-place starting positions for races on Thursday.

Thompson and JDX continued to take a bold stance when racing launched on Thursday morning. In contrast to the majority of the field, the team started the #9 on brand new rubber for Race 1, looking for an advantage early in the race that would allow Thompson to pass rivals with Kelly Moss Racing to take the lead. The strategy nearly paid off. Thompson cleared American driver Riley Dickinson on the opening lap to take second-position and then battled with race leader Kay Van Berlo for multiple corners before expending his tire advantage. After twenty laps, he would cross the finish line in second place.

With his tire allotment for the weekend used up, Thompson started Race 2 on a used set of tires, knowing that most of his competitors were on fresh rubber. Despite that disadvantage, a strong start allowed him to gain a spot on the opening lap, moving from third into second. A forceful maneuver from Dickinson saw him give that position back just a lap later. Although Thompson appeared to be under pressure in the third position early on, he earned a comfortable gap for himself as the race progressed. When the checkered flag fell, he stood on the final podium position.

Second and third-place finishes put Thompson third in the overall standings and in a good position as the series heads to Long Beach Street Circuit on April 8th. With tight quarters racing expected there and at all fourteen remaining rounds, Thompson is focused only on one race at a time, aiming to use the team’s experience from 2021 to reach a higher goal in the new season.

Parker Thompson
“This is just the beginning! Last year when the season launched at Sebring Circuit, we may have felt a little out of sorts. This season’s performance is a sure sign of our progress as a team. Two podiums here is a solid result. Still, from our team leader Jeremy Dale to our incredible partners at Surgere, Shell Tap-Up, Byers Porsche, Renier Construction, and Jersey Mike’s, our end goal is something greater than podiums. After a full season here in Carrera Cup, we’re figuring out what that will take. We made some great notes here at Sebring. Now our focus shifts to Long Beach, where we believe we can do even better.” 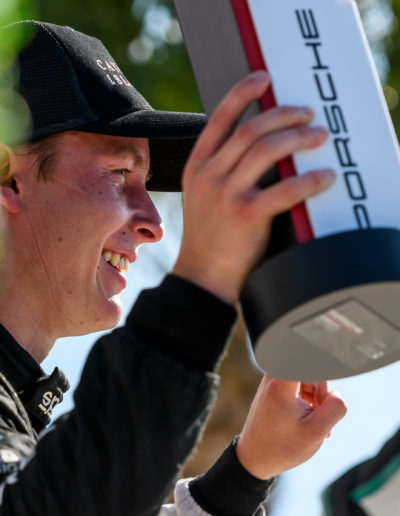 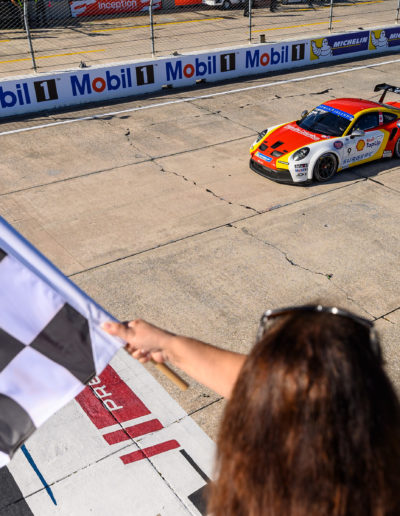 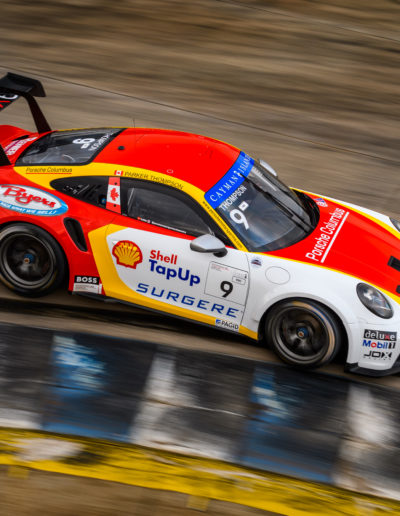 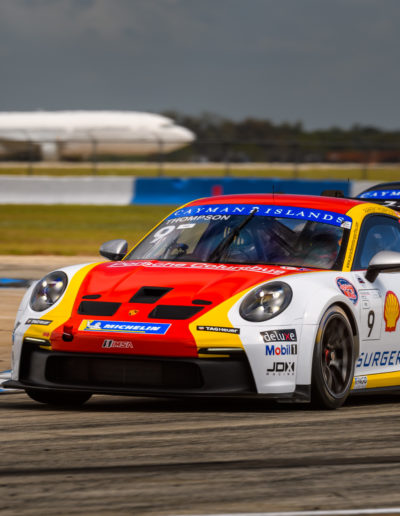 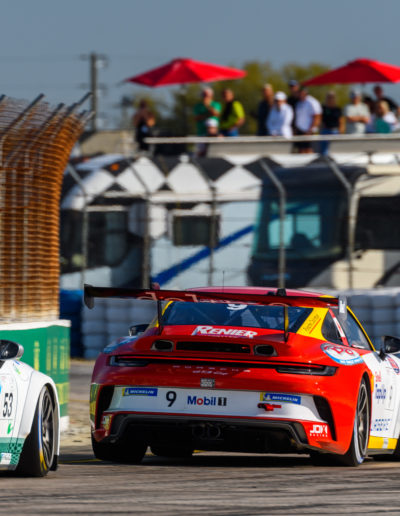 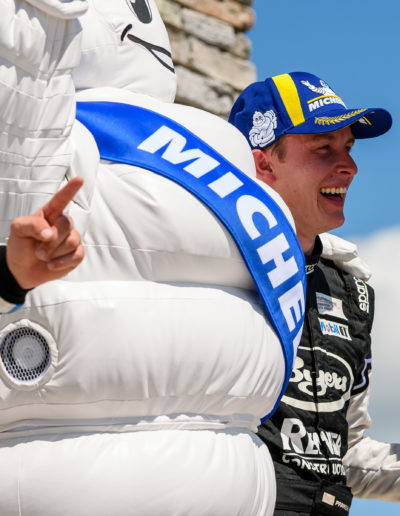 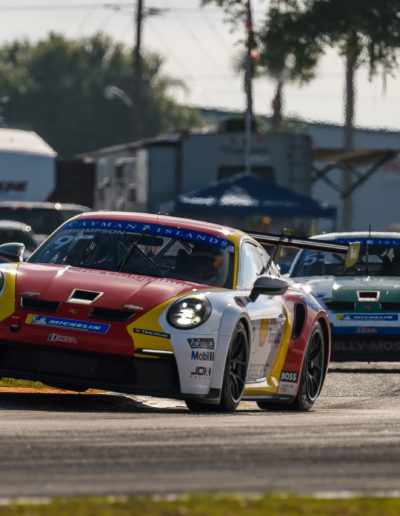 SEBRING INTERNATIONAL RACEWAY – SEBRING, FL
The inaugural season of Carrera Cup North America kicked off this weekend in Sebring, Florida. With the debut of the series and a brand new Porsche 992 Cup car, Parker Thompson returned to sportscars, driving the #9 Pro class entry of JDX Racing. Amidst the unknowns of the new series and race car Thompson would earn 4th and 5th-place overall finishes – a solid start to what is expected to be an intensely competitive season series.

After a 2020 campaign on the Road to Indy with Indy Pro 2000, the weekend in Sebring marked Thompson’s first opportunity in sportscar racing since 2019, when he first joined JDX Racing in the GT3 Cup Challenge USA. With the highest hopes for the 2021 Carrera Cup North America season, Thompson and JDX Racing had tempered expectations for the opening weekend at Sebring International Raceway. Adjustments were required all around as both team and driver came to terms with the new 992 race car and Michelin slick tire. In practice and qualifying sessions, Thompson found himself slightly off the pace of the field leaders. He would start Race 1 from 7th position and Race 2 from 8th.

During race action Thompson discovered a new pace, climbing from fourth-row starting positions to challenge for the podium. In Race 2, the action was most intense. Off the start Thompson quickly moved up, engaging in an extended three-way battle for 3rd position, chasing Leh Keen and Riley Dickinson. Making multiple passing attempts, Thompson put intense pressure on Keen. The close battle ended when lap traffic came between the two, creating a gap that could not be closed before the checkered flag flew.

With the first of eight race weekends (two of 16 rounds) on the books, Thompson holds fifth-place in the overall championship standings. Rounds three and four are scheduled for the weekend of May 21 at Canadian Tire Motorsports Park. With almost two months to prepare, Thompson is looking to solidify his championship push as the series makes the first of two visits to his home country of Canada.

Parker Thompson
“It was an absolute team effort from a great group of people to make our first round of the Porsche Carrera Cup North America such a success. There was some adversity that both the JDX team and I had to overcome but to come away with two top 5’s with our No. 9 Byers Porsche entry is a testament to everyone coming together and performing. From our ownership, engineering, and mechanics by all accounts we made a great start to 2021. This would never have been possible without the involvement of some incredible sponsors. Special thanks to Porsche Cars Canada Ltd., Surgere, and the team at JDX Racing – Byers Porsche and Renier Construction. Now it’s time to carry this momentum into the rest of the season!” 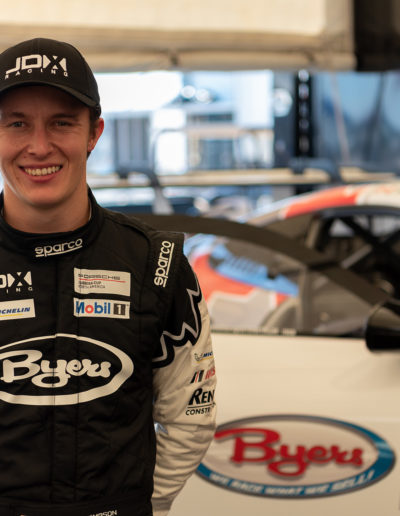 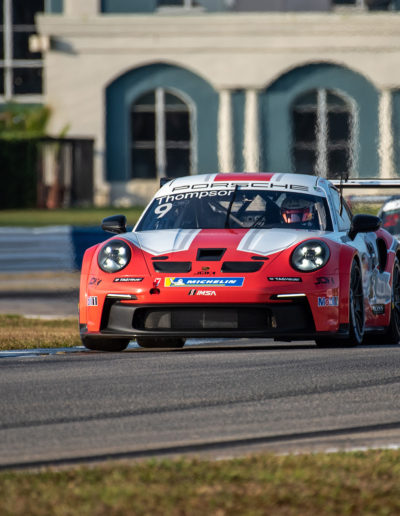 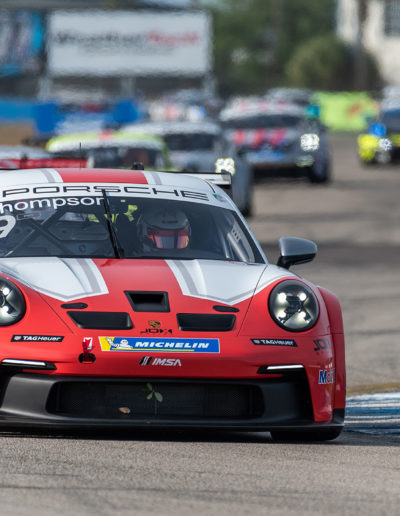 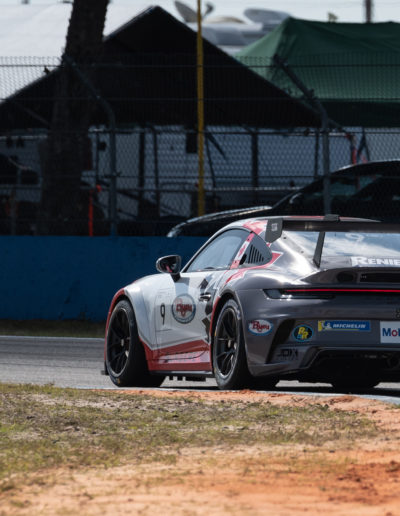 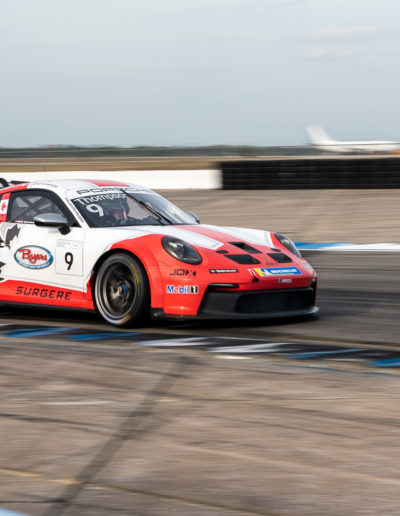 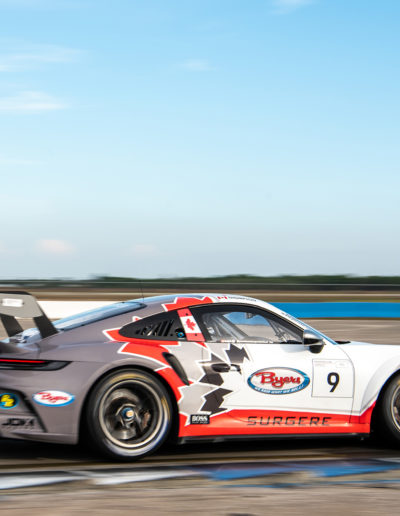