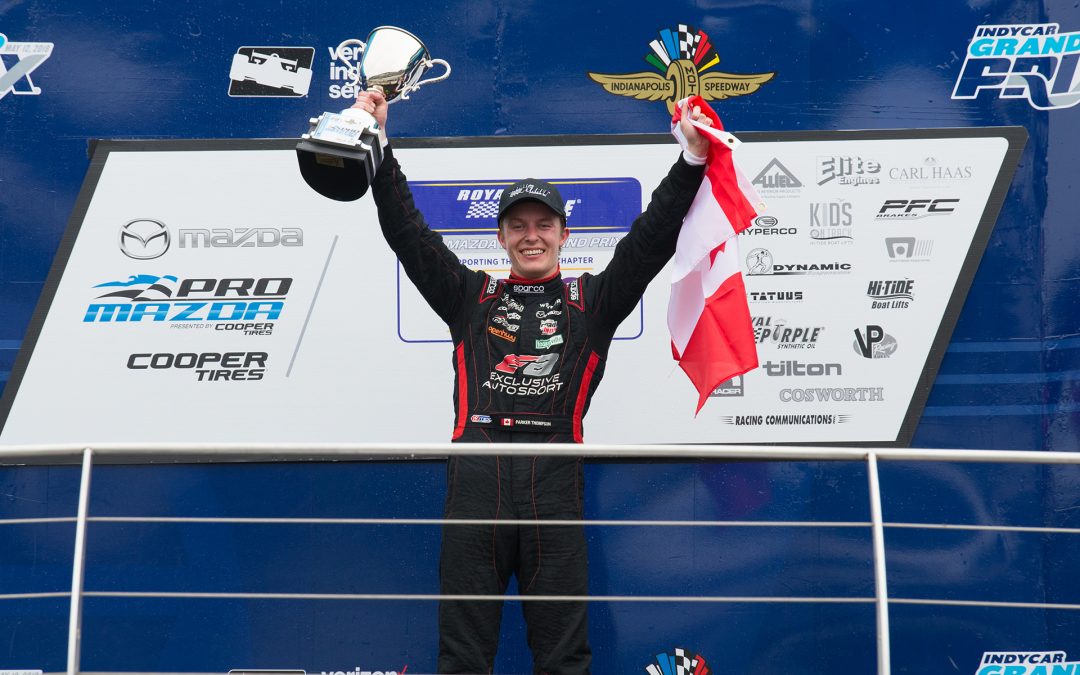 INDIANAPOLIS, IN (May 12, 2018) – Exclusive Autosport brought its two-prong Mazda Road to Indy Presented by Cooper Tires attack to the Royal Purple Grand Prix of Indianapolis, which was held his past weekend on the road course at the Indianapolis Motor Speedway, and they came away with a crucial Pro Mazda victory and the point lead in the championship. It was another strong outing for the team’s newest ladder series program. Coupled with the performances of the operation’s USF2000 drivers, Exclusive Autosport left Indianapolis with five top-10 finishes and two drivers in the top-five of their respective championships.

The team fielded cars in both the Cooper Tires USF2000 Championship Powered by Mazda and the Pro Mazda Championship Presented by Cooper Tires at the event, and Canadian Parker Thompson persevered through mechanical issues early in the weekend to score his second victory of the year in the second Pro Mazda race, backing up a respectable fifth from Race 1. Fellow Canadian Antonio Serravalle continued his rapid development in his Tatuus PM-18, recording his best finish of the young season with a ninth in Race 1.  Exclusive’s USF2000 team started deeper in the field after struggling in qualifying, but they pushed through all weekend to post solid results in the races, advancing to fight for results in the top-10.  Igor Fraga started 12th in the opening race and moved to eighth, while Manuel Cabrera finished ninth in Race 2 from 22nd, which was his best finish to date.

“I am incredibly proud of the entire team,” offered Michael Duncalfe, Team Principal. “We had a few hurdles to overcome this weekend, however, the crew and drivers worked incredibly hard all weekend and never stopped pushing. It was really a proud moment, seeing Parker in the Exclusive Autosport #90 Pro Mazda win at the historic and famed Indianapolis Motor Speedway.  I am also pleased with the progress of each the Exclusive Autosport drivers have made this year.  Antonio Serravalle, in the #91 EA Pro Mazda, saw his best finish of the year as he drove his way into the top-10. He’s really starting to feel comfortable in the car. I am confident there is more to see out of Antonio.”

Thompson was quick out of the gate during Thursday’s open test and practice sessions, but a mechanical issue in qualifying restricted his running to just two laps, which left him 11th on the grid for Race 1.  Parker turned it up for Race 2 qualifying to sit sixth in a very tight group on top of the timing charts. Serravalle continued to learn the circuit and pick up speed, posting qualifying runs good enough for ninth and 11th in the two races.

Knowing that he needed to have a strong run in the opening Pro Mazda race, Thompson stayed out of trouble on the start and took advantage of two caution periods to get himself into the battle up front.  When the checkered flag flew, he had recovered to a fifth-place finish.  Serravalle was incredible racy and battled with veteran MRTI driver Nikita Lastochkin for sixth for many laps, eventually taking ninth in the final tally.

The second race was held on Saturday morning before the Verizon IndyCar Series INDYCAR Grand Prix, and this time, Thompson started from the outside of the third row and he was ready to attack. After a frontstraight incident, the race finally went green and Thompson was quickly up to second behind Carlos Cuhna.  Parker chased Cuhna relentlessly and made his move to the inside of turn 1 on lap 17 of the 25-lap contest, assuming a lead that he would not relinquish.  Thompson then piloted his #90 Exclusive Autosport machine to a 1.8885-second win, which advanced him into the series point lead by 22 markers. Sadly, Serravalle did not make the finish, dropping out on lap 12 with a mechanical issue.

The next stop on the MRTI trail will bring the drivers back to Indianapolis as both the USF2000 and Pro Mazda championships will return to the 5/8-mile banked Lucas Oil Raceway after a one-year absence.  The Carb Night Classic will be held on the evening of Friday, May 25 and will provide Exclusive Autosport’s drivers with the crucial oval experience that they will use on their entire journey towards the Verizon IndyCar Series.

Exclusive Autosport is pleased to be able to partner with great companies, such as AERO™ Advanced Paint Technology (www.rethinkpaint.com), which is used on all their race cars.

Driver Quote: “The Royal Purple Grand Prix of Indianapolis presented many challenges for the fellas in black and red this weekend. This could have easily been a weekend where we threw away a championship, yet somehow we rallied together and took home a win. After a $0.25 part failure in Q1 led to a last place starting spot for race one, we almost didn’t make it to the grid for Q2. The fact that we bounced back with a five and a win is a true testament to what this small team of determined individuals is capable of. We’re planning on using this momentum to our advantage at the oval in Indy later this month.”