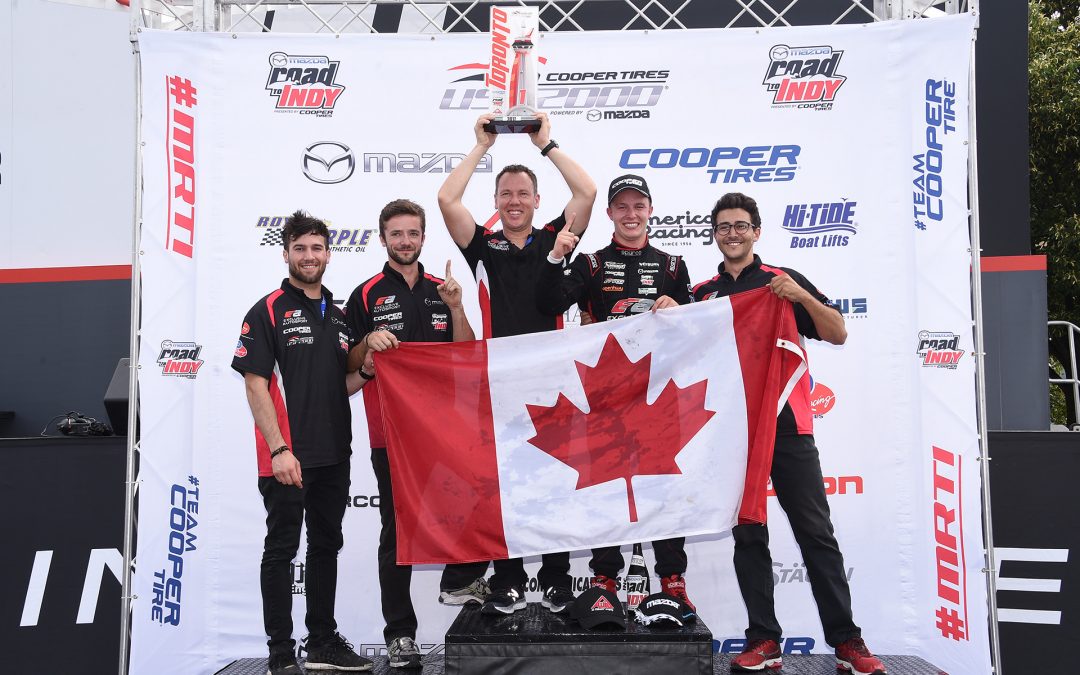 PALMETTO, Fla. – Exclusive Autosport may be new to the Mazda Road to Indy Presented by Cooper Tires, but it is far from being a “new” team. With five years of experience in Canadian and U.S. junior formula series including numerous championship titles, the team continued its progression in 2017 and made an immediate impact on the Cooper Tires USF2000 Championship Powered by Mazda.

Exclusive Autosport was born from Michael Duncalfe’s driver management company, Exclusive Management Inc., with head offices in Saskatoon, Sask. Beginning with a diecast company he started out of his parent’s house when he was only 17, Duncalfe brings a history of success to his latest expansion.

Duncalfe shares an early racing trajectory with many of the Mazda Road to Indy racers. His father starting karting when the young Duncalfe was 8 years old and, growing tired of sharing seat time with the youngster, bought his son a kart of his own. Racing soon followed, but it was a karting scholarship that jump-started the program.

“Similar to the Skip Barber Shoot Out scholarship, Bridgestone Canada had a karting scholarship that earned you a free ride in the Bridgestone F2000 Championship,” said Duncalfe. “I was the quickest driver against 20 other drivers competing over three days, so I earned the scholarship. I finished fourth overall and won Rookie of the Year in 1998.”

The young entrepreneur left racing to focus on his university degree, when a search for a diecast model of Greg Moore’s 1999 Player’s Champ Car prompted him to start his own diecast model company. It was the success of this business that enabled him to get back into racing. During his experience as a driver he perceived a market need for services to help young racers get their start and guide them in the industry, so he branched out to form his own management company.

“I’ve always wanted to be a part of the racing industry. I thought at first that it would be as a driver, but I love being on the management and team side of things. I was fortunate that I had been able to learn the marketing and sponsorship side of racing from a very early age, and the biggest thing I learned was how to present to a company. When I was younger, I thought that it was about me and that people would want to sponsor me because I was a good driver. I learned very quickly that it was not about me but about the company, about taking care of their needs and delivering for them. In turn, I got to go racing.”

Duncalfe started Exclusive Management in 2007, putting partnerships and marketing deals together for drivers and helping them to navigate their way through development programs like Skip Barber, with its scholarship into USF2000. Wife Kimberly joined the organization in 2011, working on marketing communications and logistics. The experience gained helped him take the next logical step, to take control into his own hands by forming the Exclusive Autosport team. But in typical Duncalfe fashion, he not only found himself owning a team, but operating a chassis importing business as well.

“At the end of 2012, I had a number of drivers who were ready to continue their development and the next logical step was F1600. Based on the best attributes of several very professional programs I’d worked with in open-wheel and sports car racing, we started the team. At that same time, I had a young driver testing with the Cape brothers in their USF2000 car and it was the first time I’d seen (an Australian-built) Spectrum 1600 first hand. They introduced me to Michael Borland with Spectrum and I became the Canadian importer for Spectrum chassis, while the Cape brothers were the U.S. importers. At the end of 2013, the Capes decided not to continue so we became the North American importers.”

Exclusive Autosport won numerous championships in Canadian F1600 and F2000 before branching out into the U.S.-based F1600 Championship Series and capturing that title in 2015. The natural progression was to the Mazda Road to Indy and the USF2000 Championship, but with a year remaining on the old Van Diemen chassis, Duncalfe bided his time until the Tatuus USF-17 made its debut this season.

“It had always been a dream and a goal to be a part of the Mazda Road to Indy Presented by Cooper Tires and it made sense to expand here when the Tatuus USF-17 was introduced. This is the most competitive junior formula racing in North America, if not the world, so this was another challenge for us. It’s one more avenue for us to help young drivers achieve their goals.”

Duncalfe had a short list of prospective drivers for his initial foray into the series, but one stood out from the rest: Red Deer, Alb., native Parker Thompson, who was coming off an agonizingly close runner-up finish in the series in 2016. Thompson already had two seasons in USF2000 but Duncalfe knew he would be ideal to help the team make the transition – and the idea of an all-Canadian combo was too good to resist. That Thompson had already been to Victory Lane with the team was a bonus.

“I met Parker at the Saskatoon kart track when he was a young junior karter of 12 or 13 years of age. He was mature beyond his years and quick behind the wheel of a kart. It was before we had the race team, but we kept in contact. During his first year in USF2000, his father Doug contacted me because they were looking to get him some additional seat time. We brought him out with our F1600 team to Circuit ICAR in Montreal and he won both races – the first formula car wins of his career. He did another weekend with us at Mont Tremblant and got a pole and fastest lap of the weekend.

“We’ve always had a great respect for Parker,” Duncalfe continued, “and what he can do on and off the track. We knew we wanted to work together, it was just a matter of finding the right time. We weren’t in a position to expand in 2016, knowing that the new car was coming online in 2017, but when we joined the series in 2017 we were able to put a deal together. He was a little hesitant to come back for a third year but I told him ‘this is Tatuus USF-17 racing now, it’s a completely different series.’ He was excited to work with us and to spearhead testing on the new car. He worked with the engineers to develop setups and really showed how strong his technical background was. He is very precise with his feedback and it’s usually correct.”

Exclusive Autosport added American rookie Dev Gore and Australian Luke Gabin late in February, with Gabin running in the first six races of the season. Saskatchewan’s Jayson Clunie graduated from the team’s F1600 program and joined the USF2000 squad mid-season. The team experienced its share of challenges over the first half as it established a setup database and melded as a team, but Thompson’s podiums at St. Pete and Barber were a harbinger of better times to come. On the heels of a 12th-place finish in the series only oval event at Iowa, the team put it all together when it mattered most. With home-country bragging rights on the line and the championship entering the final stretch, the team broke through with two dominating victories on the streets of Toronto that not only thrilled Canadian fans, but put Thompson squarely back in the title chase.

“Iowa was a difficult weekend for us. Parker gathered everyone in the trailer and told them it just didn’t matter, we were going to go win Toronto. We led all of practice, got the pole for race one and won both races. It’s hard to put it into words: it was the most special and rewarding moment of my race career, by a good margin. We believed we could do it all along, but some things out of our control prevented it from happening earlier but when it all came together in Toronto, it was absolutely amazing. To show everyone how strong we were, to have a Canadian driver get the team’s first series win on Canadian soil, was incredible.”

Thompson added a victory and a second-place finish at Mid-Ohio to finish third in the driver’s championship and lead the team to fourth place in the Team Championship. While Duncalfe went into the season firmly believing that the title was a good possibility, he’s happy with the prospects for the future.

“I’m very proud of what we accomplished this year, to finish third in the driver’s championship and to be the highest-finishing rookie team. I have the utmost respect for all the teams and drivers in the series so to get three wins and three poles makes me extremely proud. Our ultimate goal was the championship and we fell a little short, but I know we’ll be even stronger next year.”

“Next year” has started already for Exclusive Autosport, as the team has added two brand new Tatuus PM-18s to their stable with the intent to add the Pro Mazda Championship Presented by Cooper Tires to its repertoire. With the new car completing the triumvirate of new chassis for the Mazda Road to Indy, Duncalfe feels that giving other teams a head start would not make sense.

“It’s a big jump financially, since we have now bought four USF-17s and two PM-18s in the last 12 months, but we’re confident with our USF2000 program and what we’ve learned with this car so we felt we could put together a really strong Pro Mazda package. We also didn’t want to fall behind the curve and come in a year too late.”

As an illustration of its commitment, Thompson shook down the team’s first PM-18 in New Jersey and had an electronic issue. The team drove all night to Elite Engines’ Wisconsin shop, got the issue sorted, and headed straight to Road America to test Dutch phenom Rinus VeeKay. The second car was purchased the Saturday before the Chris Griffis Memorial Test. The team built the car on Thursday, and Thompson broke in the ring and pinion on Saturday. That Thompson promptly set the third-quickest time of the weekend on Sunday is a testament to the team’s intent to compete against the veteran teams – and win.

“The biggest hurdle for us is that people still see us as a ‘new’ team. We may be new to the Mazda Road to Indy but we’ve just had our fifth year of competition. We’re the most accomplished F1600 team in North America and we’ve had an enormous amount of success in a short time. This is the natural next step for us so we look forward to continuing that success.”