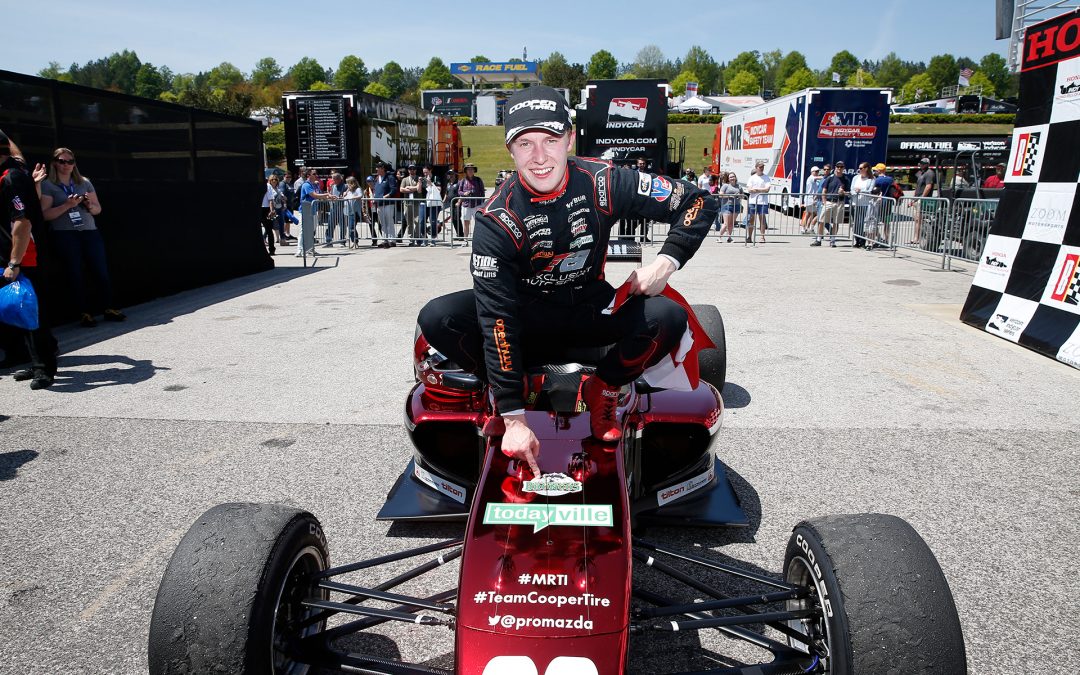 LEEDS, AL (April 25, 2018) – Exclusive Autosport enjoyed a successful weekend on the undulating layout of the 2.3-mile, 17-turn Barber Motorsports Park in Birmingham, Alabama, making two trips to the podium following races in the Pro Mazda Championship Presented by Cooper Tires. In 2017, the team made its debut on the Mazda Road to Indy in the Cooper Tires USF2000 Championship Powered by Mazda, and their driver Parker Thompson scored the operation’s first win in a weekend sweep on the street of Toronto that July. The Red Deer, Alberta resident kept that streak alive as he delivered for the Exclusive Autosport crew again this weekend, taking home their first win in the Pro Mazda Championship Presented by Cooper Tires. Thompson’s Tatuus PM-18 rolled out of the hauler on rails, providing him with the car to score the pole position for both Race 1 and Race 2, obliterating the track record in the process. Teammate Antonio Serravalle is just beginning his career in cars after many successful years in karting, and this was the young Canadian’s first time in wheel-to-wheel competition at the incredible Barber facility, having tested their earlier in the year.

“What a weekend!” enthused Michael Duncalfe, Team Principal. “I cannot say enough about this Exclusive Autosport team. I have to thank our awesome crew for all of their hard work and dedication to this program. Parker Thompson performed like a pro! P1 in practice, 2 poles, a track record, one win and one second place finish.  He’s a man on a mission. It’s an honour working with Parker and having him drive for EA. I am also really proud of Antonio. He once again showed how quick he can be behind the wheel of our PM18 machine. It’s unfortunate he wasn’t able to complete the weekend, however, I’m confident he will be back stronger than ever in May at Indy.”

For the most part, the team had a strong opening to the weekend, as Thompson was on fire from the first on-track session. The 20-year-old broke the existing track record on Friday afternoon in Race 1 qualifying, and then lowered the mark on Saturday morning’s Race 2 qualifying run.  The opening race of the doubleheader was run on Saturday afternoon, and it was simply a perfect performance by the team and Thompson, as he jetted away early to score a 5.226-second victory, the first Pro Mazda win for the squad. Parker was carrying the decal of the Humboldt Broncos Jr ‘A’ hockey team, which lost 16 of its players and staff in a tragic motor vehicles accident on April 6. The Exclusive Autosport team has dedicated the win to the Bronco’s memory. Thompson used his pole position to quickly step out from the competition, but unfortunately, Serravalle was deeper in the field and was driven way off the track in Turn 17, and this excursion put him in a collision course with a sponsor signage banner. The resultant contact damaged his car beyond immediate repair and he was forced to retire.

The weather in Birmingham was beautiful on Friday and Saturday, but the pending arrival of rain on Sunday made deciding on set-up a guessing game. Based on the immediate forecast, the team elected to go with a primarily ‘dry’ set-up, but light rain did begin to fall as they were on pre-grid, making it too late for any adjustments.  Thompson led early from pole, but in damp and slippery conditions, his car’s lack of overall grip allowed two drivers to slip past. Never giving up, he pushed hard to stay in a position to capitalize on any mistakes by his competition, and he was rewarded for his efforts when the leader went off-track late in the race. The incident brought out a full course yellow, and the race would end under caution, giving Thompson a strong second place finish to cap the weekend. Parker was the only Exclusive Autosport PM-18 in competition for Race 2, as Serravalle was not feeling well on Sunday morning and elected not to run.

Parker’s pair of podium finishes have moved he and Exclusive Autosport into the championship point lead heading to the Indianapolis Motor Speedway road course weekend in May. Thompson has enjoyed success at the IMS road course in the past, finishing first and second in the Cooper Tires USF2000 Championship Powered by Mazda events in 2016. The team will aim to continue this success through the entire Pro Mazda Championship Presented by Cooper Tires schedule, as they maintain their focus on winning the championship. Serravalle is eager to continue his development by getting his first taste of the iconic Indianapolis Motor Speedway. Exclusive Autosport’s USF2000 drivers will re-join the Pro Mazda crew in Indianapolis to take part in their second event of 2018.

Driver Quote: “It was a very special weekend in Alabama with my Exclusive Autosport crew. We put the #90 in victory lane, carrying the Humboldt Broncos logo, which meant a huge deal to our entire team with our headquarters being based in Saskatchewan. I’m extremely proud of the boys in black and red. We have all been working non-stop during the off-season to have a weekend like this. With a win, two poles, and a new track record, we’re ready to roll this momentum into the rest of our championship. Bring on Indianapolis and the month of May!”